In our artistic optical salon, located in the heart of Budapest, a few minutes from Széll Kálmán tér, we place great emphasis on creating a family atmosphere, in which modern innovative technology meets art. Transylvanian values are present everywhere in our salon, which gives it a unique character.

"In the Optistyle Optical Salon, we have created a place where people like to come, and we give our time to each other. That allows us to work at a completely different level of professionalism, and our patients feel comfortable with us. That means the most to me," says Klára Simó, salon manager.

In addition to the appearance of our shop, at the Optistyle Optical Salon we want our patients to have a good time and enjoy being here, so that the atmosphere of trust that used to characterise the patient-optician relationship can be re-established.

We provide a unique appointment for each of our patients. As a Varilux Master of Vision, we consider it important to provide our patients with the most advanced eye measurement technology available on the optical market.

Our optical salon is one of the few salons in Hungary where 4D eye measurement is available. Our special Visioffice X equipment helps us create the perfectly personalised spectacle lens, by assessing your eyes, face, posture and eye movements, as well as the properties of the chosen frame. With the help of this measurement, we create a unique progressive lens for you with a revolutionary technological procedure to make your vision experience perfect again.

In the Optistyle Optical Salon, our goal is to make choosing your glasses a pleasant experience.

We look forward to seeing you in the Optistyle Optical Salon at a time of your choice! 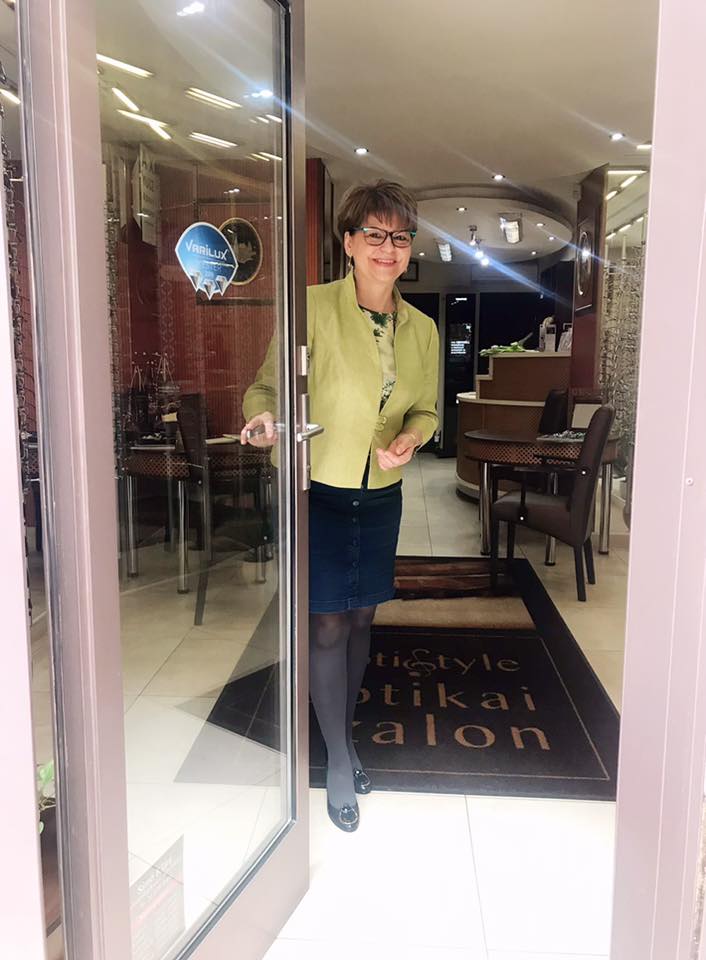 owner of the Optistyle Optical Salon

Born in Transylvania, Klára Simó obtained her first qualification there. When she arrived in Budapest in 1990, she started a job in the first and only optical salon in the country, in the vicinity of Váci utca. At that time, optician’s shops were typically in small and crowded premises, and this salon with its fountain and crystal mirrors was very different. Within a few years, she became the leader of the salon, and later she took over the management of the Optirex optical shop on Szent István körút, opposite the Vígszínház Theatre. She spent fifteen years there, became acquainted with the theatre world, and soon acquired a reputation by word of mouth for her kindness and attentive service. A number of prominent persons and public figures became her permanent clients.

In 2011, a new chapter began in her life when she realised an old dream and opened her own shop in the Second District of Budapest. There was no doubt that music, her old passion, was also to play a role in the salon. Thus was the Optistyle Optical Salon born, where piano music is played every day. Klára Simó’s creed and purpose is to make personal and high standard optical services accessible for everyone, and make choosing their glasses a pleasant experience.